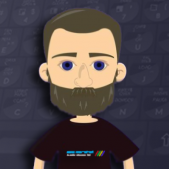 Wari is an old game with roots that are much older. Its origins go back thousands of years to variety of other similar games, all classified as being members of the Mancala family. Other variations are Awari, Oware, Pallanguli, Kalah, and countless other offshots.
The program matches you against the computer. You are probably going to lose few games before you win one the computer plays pretty good game. This may hurt your ego little bit, since Wari is purely skill game (like chess or checkers). There is no element of luck involved, as would be the case with backgammon, for example. When you lose, it's because you were outplayed.
How to use it
When you start the program, the first thing it does is display the Wari board and ask you if you want to go first. The board is made up of twelve squares in two rows of six. Your side is the bottom side, numbered one through six from left to right. The computer's side is on the top, numbered seven through twelve from right to left. At the start of the game, each square has four "stones" in it. There is no way to differentiate between your stones and the computer's. They all look alike and will move from one side to the other during the course of play. The first player "picks up" all the stones in one of the squares on his side of the board and drops them, one to square, starting with the next highest numbered square. The stones continue to be dropped consecutively in each square, continuing over onto the opponent's side if necessary (after square number 12 comes square number again). If the last stone is dropped onto the opponent's side and leaves total of either two or three stones in that square, these stones are captured by the player who moved, and removed from the board. Also, if the next-to-last square in which stone was dropped meets the same conditions (on the opponent's side and now with two or three stones), its stones are also captured. This continues backwards until the string of consecutive squares of two or three on the opponent's side is broken. Regardless of whether any captures are made, play alternates back and forth between the two players.
The object of the game is to be the first player to capture twenty-four or more stones. That's half of the forty-eight stones that are on the board at the beginning of the game. There are few special rules to cover some situations that can come up in the game. It is not legal to capture all the stones on the opponent's side of the board, since this would leave the opponent with no moves on his next turn. By the same token, when your opponent has no stones on his side (because he had to move his last one to your side on his turn), you have to make move that gives him at least one stone to move on his next turn, if possible. If you cannot make such move, the game is over and counted as draw.
During the course of the game, it's possible for square to accumulate twelve or more stones in it. Moving from such square causes stones to be distributed all the way around the board. When this happens, the square from which the move was made is skipped over. So, the square moved from is always left empty. It takes the computer anywhere from five seconds to about forty seconds to make move, depending on the complexity of the board position. The word THINKING is displayed during this time, and period is added to it as each possible move is evaluated in sequence (seven through twelve).