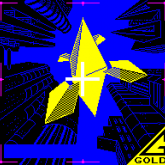 By Strider,
February 19 in General Retro Chat (not X16)