Just a small clarification: When David mentions a Kickstarter he's using the word in the generic sense, meaning "crowdfunding". We're not yet decided what the home will be for the campaign. It may wel

To answer your question about different key switch types, I would highly recommend taking your next move carefully lol.  Once you feel mechanical switches under your fingers, you can't ever really go 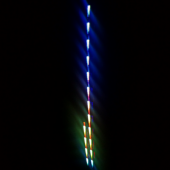 Took me almost a year but I finally got it. Decided to go with Cherry MX Clear and no dampeners. I love it! Thanks for all the guidance everyone. Time to fill this thing up with Fritos crumb