You could read the start of screen RAM from the VERA registers and be compatible with any start address! 🙂 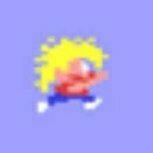 BSOUT and CHROUT is the same function, just called different things in different documentation and source...