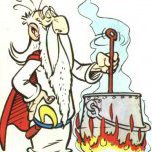 When the hardware ships, I hope it will come with an SD card with some/any exclusive pack-in software or game?  That will make for a very nice experience "out the box"

13 answers to this question